Week ago there was first ever edition of Devoxx4Kids hosted in Poland. It is worth writing about it for several reasons. 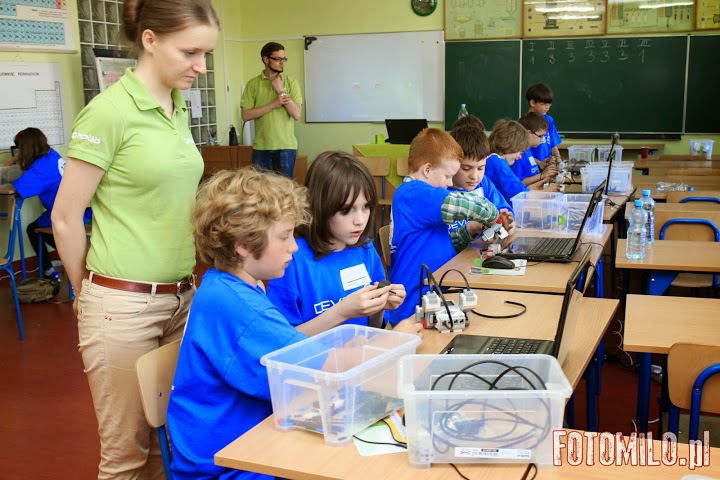 First of all as a father of three I’m really happy to see such events happening locally. My own kids were still too young to participate therefore I’m already looking forward to the next edition! :) 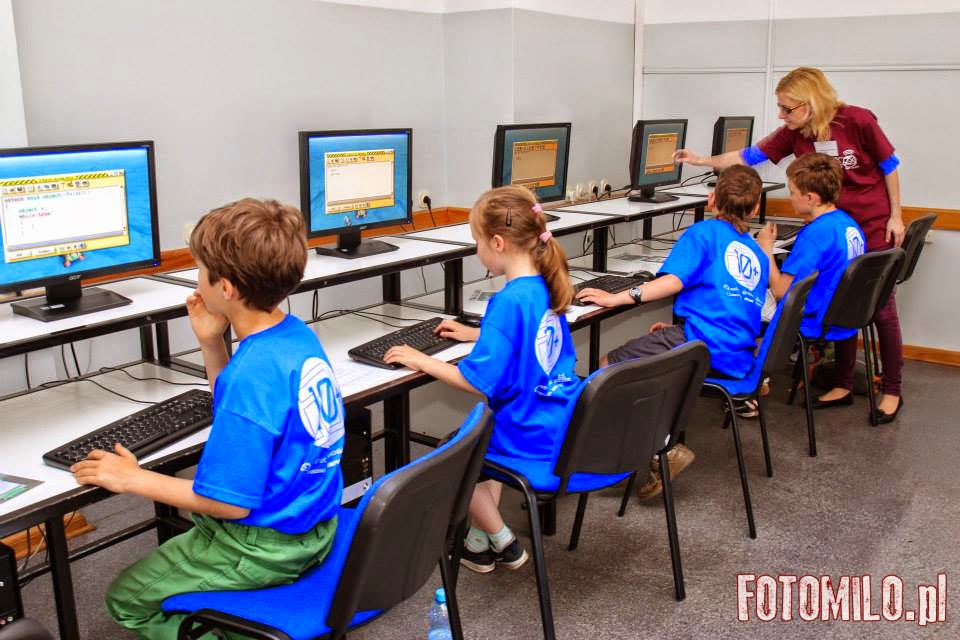 I have two very personal reasons to feel really proud about this event. Devoxx4Kids Poland was organised mainly by people from Warsaw JUG. As a member and one of previous leaders of this community - currently focusing on JBUG - I love to see how it is thriving. Lot of awesome new initiatives are being brought to live!

Additionally this edition was sponsored by my employer - Red Hat. Let me just say that when I approached Mark Little - Vice President of Middleware Engineering - I didn’t have to ask twice about it. It makes a difference to work for a company which cares about local communities, spreading technology and educating people about it! 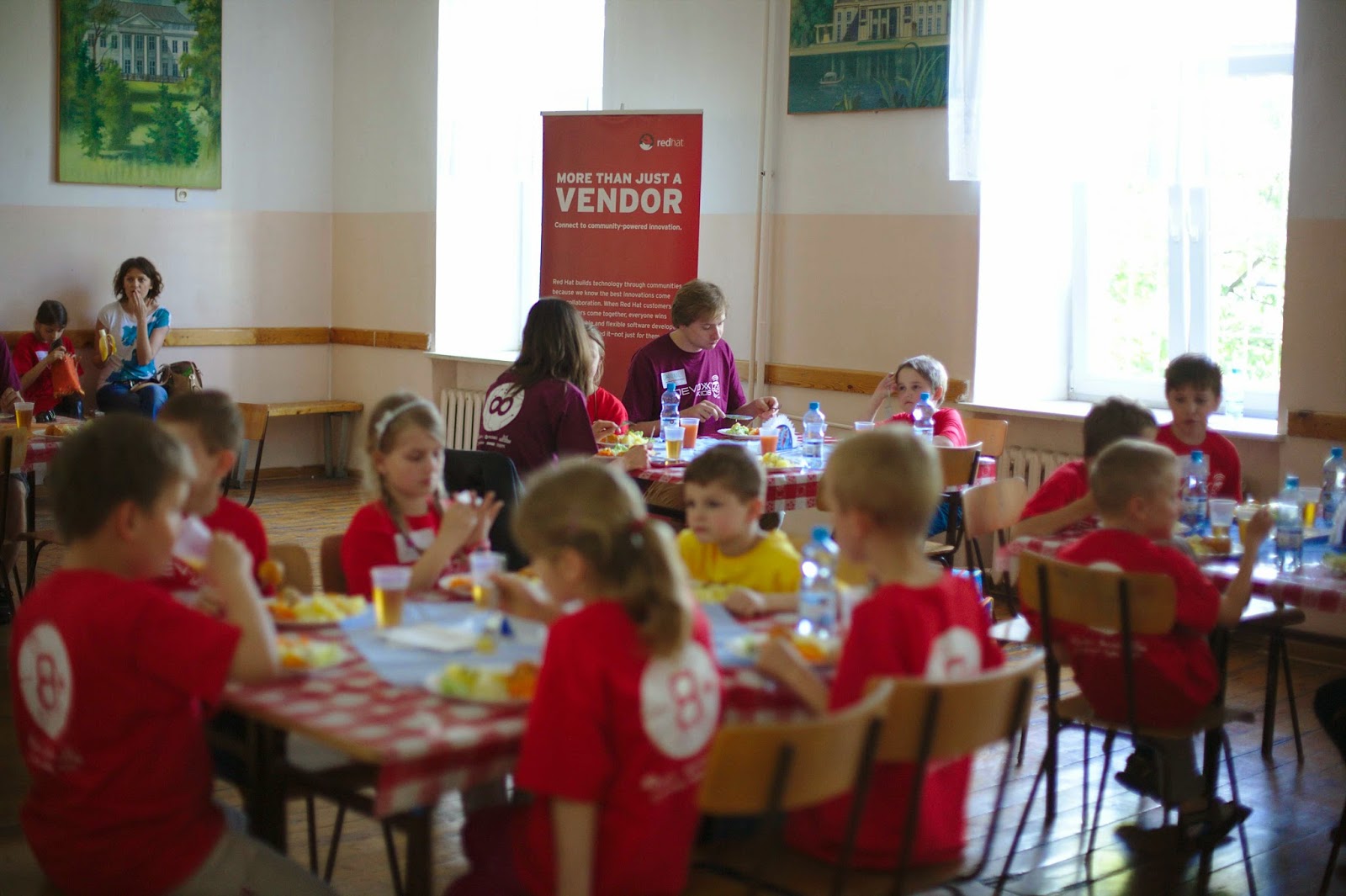 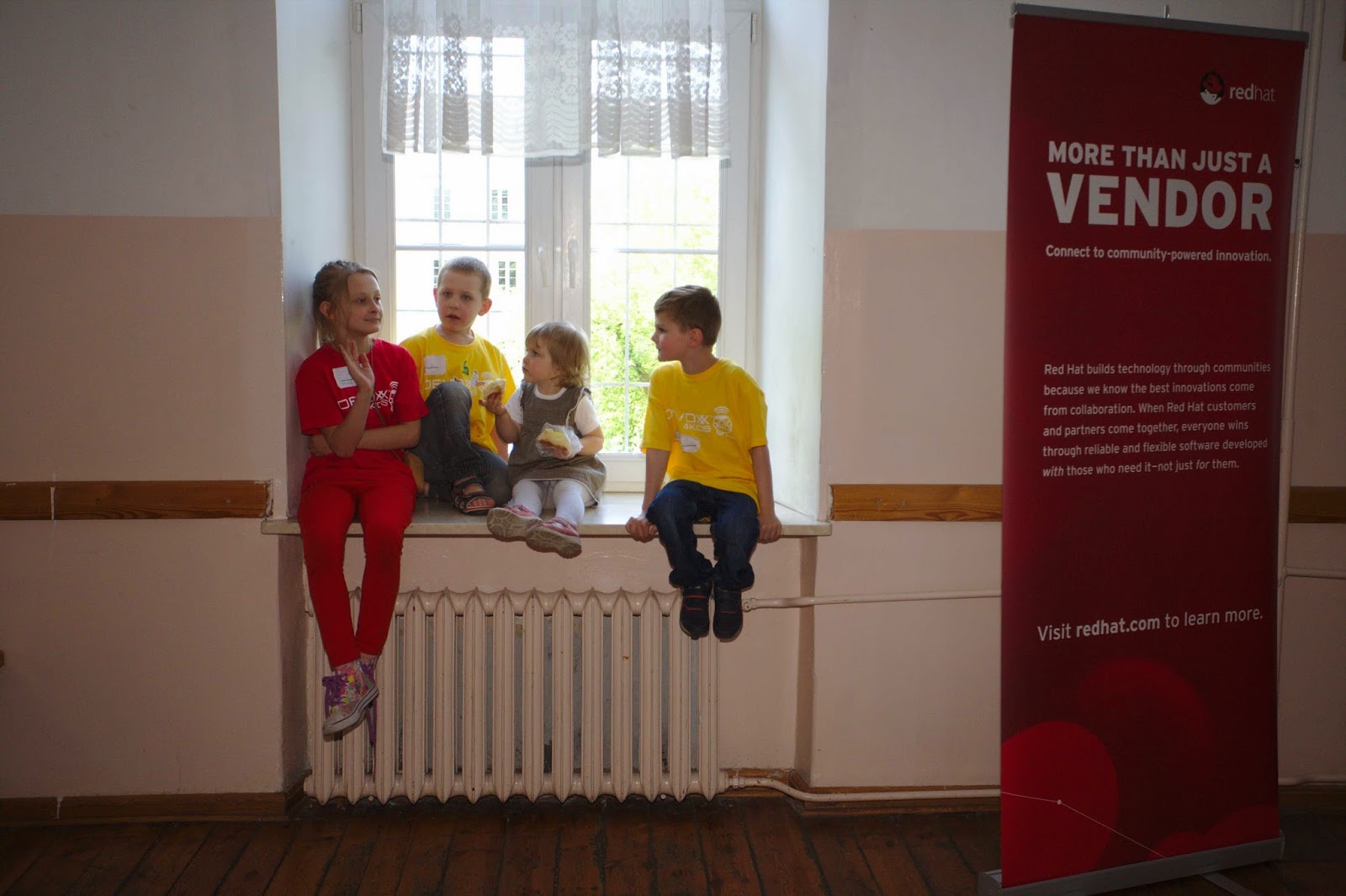 Last and probably most important reason - looks like this event might have been one of the biggest Devoxx4Kids worldwide!!! 112 kids attended 12 workshops in 8 parallel tracks…. wow! 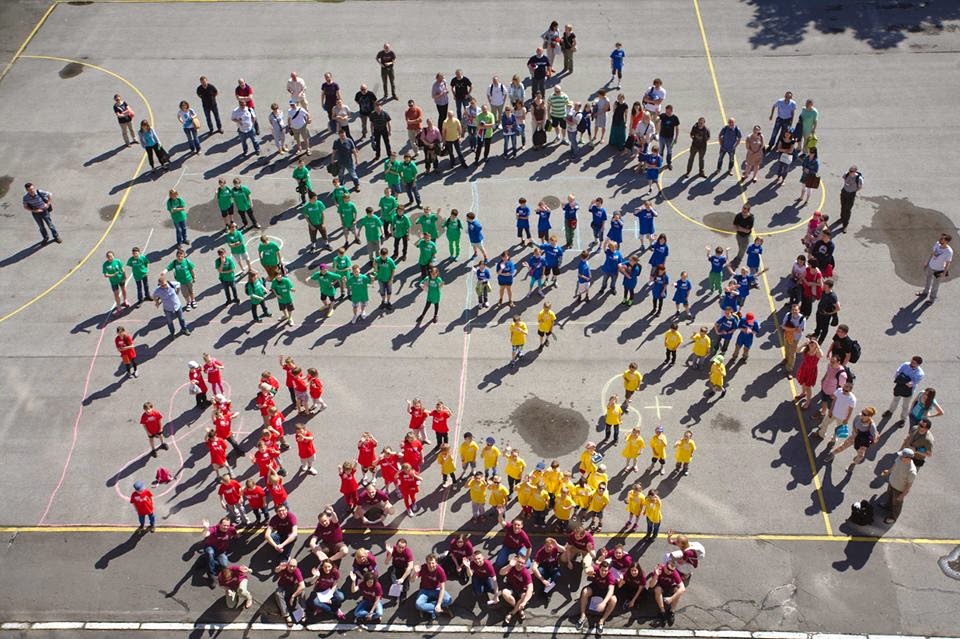 To give you an idea here is the agenda arranged by different age groups:

I would like to end with simply congratulating organisers - Ewa Waliczek, Dariusz Kaczynski, Michal Lewandowski and Tomasz Kucharski - together with all volunteers and other sponsors. Well done everyone!


Make sure to check out awesome photos from the whole event:


(all photos by fotomilo.pl and Andrzej Goławski)
Posted by Bolesław Dawidowicz at 5:16 AM No comments:

Warsaw JBoss User Group is only 2 months old still we already had our 3rd meeting. This time Marek Goldmann joined us to present Docker. New and cool light virtualization solution. We had a nice crowd of around 50 attendees and good followup discussions discussions after.

Posted by Bolesław Dawidowicz at 6:32 AM No comments:

To be honest I'm still quite shocked how it all developed and worked out. Warsjawa since few years has been quite exceptional kind of conference. It was always free, organised by community and for the community. However since few years it is containing only workshops - no pure traditional presentations at all. Now it seems that it may be one of the largest events of this kind around - or at least I'm not really aware of any other one like that.
Year ago it contained 10 workshops and nearly 200 attendees showed up. This year it grew into:
- 42 workshops
- 53 presenters/coaches (tbd)
- Nearly 500 attendees
- 12 sponsors
- 8 volunteers
During retrospective within organising committee after previous edition we had few ambitious plans for next one. Ok… it was mainly Wojtek Erbetowski who was throwing ambitious ideas while I was the sceptical one ;) Last Saturday most of those actually happened and worked beyond our initial expectations. After several months of preparations this is really rewarding experience. :)
It is worth mentioning that this is also quite an achievement for the whole Warsaw/Warszawa JUG community. Other conference under JUG umbrella - Confitura - had over 900 registered attendees this year. Nowadays there are 3 well organised and independent groups of people responsible for biweekly WJUG meetings, Confitura and Warsjawahttp://warsjawa.pl/ conferences. However we are still one WJUG community and it is truly awesome to be part of it. During past few years I was not that much active however I had chance to be one of JUG leaders and part of organising committees for both conferences in 2008. Looking back I think this community has never been as vibrant and active as now.
Just to complete the picture with few highlights about Warsjawa 2013….
This year we had really great variety of topics. Main categories:
- JVM - inlc. Profiling, Java 8..
- Frameworks: incl. Wiciet, AngularJS, Vert.x, JBPM, Struts2
- Design Patterns
- Scala - 3 different ones about language itself, Play2, Akka…
- Architecture and Testing
- Cloud Computing - Vagrant, Chef
- Build Tools - Gradle, Phabricator
- Mobile - iOS, Android
- Hardware Fun - Arduino
- Soft & Agile
- NoSQL / Big Data - Storm, Cassandra, R, ElasticSearch
Dedication from presenters and coaches was quite amazing. Many workshops lasted 6h. Konrad Malawski deserves to be mentioned separately for teaching Scala for the whole day. 9h in raw…. it is quite an achievement!
Most stressful part for the organisers was to provide stable and reliable internet connection - really critical for workshops. Wifi is pretty known to have reliability issues with so many devices around. Therefore we invested significant part of conference budget into huge number of network switches and patch cords. This should really give you an idea about our dedication…
Traditionally we are really grateful for the support from Warsaw University. Warsjawa hijacked over 20 rooms at the The Faculty of Mathematics, Informatics and Mechanics. It really matters for us that we are always warmly welcomed there.
We also had really exceptional squad of volunteers that helped a lot with final preparation. Few coming from Krakow - which is not a short journey to make. Such people really bring the motivation!
Ok… I could go on and on… Looking forward for next year and enjoy the photos!

Posted by Bolesław Dawidowicz at 2:14 PM No comments:

Warsaw JUG is traditionally hosting 2 bigger events during the year. First one is Confitura (former Javarsovia) which is a full scale free Java conference - with around 800 attendees this year. Second one is WarsJawa (former WarsJava...) which is smaller and more workshop focused event. This year I had an honor to be one of co organizers of it

2012 edition was a bit special as we also celebrated 100th meeting of Warsaw JUG. Therefore during opening session several people who have been engaged in local Java community over past years shared some of their memories. 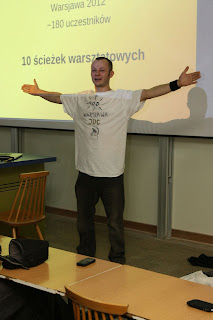 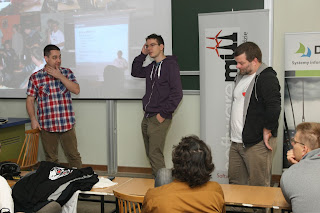 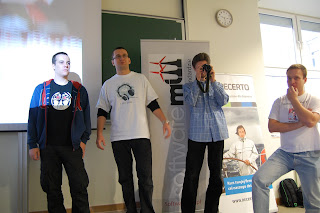 Bartek Zdanowski, Tomasz Szymanski, Paweł Wrzeszcz, Łukasz Lenart, Jakub Nabrdalik, Wojciech Erbertowski, Kamil Szymański, Marcin Zajączkowski and me came on stage. Few opening words from JUG founder Jacek Laskowski were played from video as he could not join us. Maybe it is a sign of future direction to consider video streaming more … :) 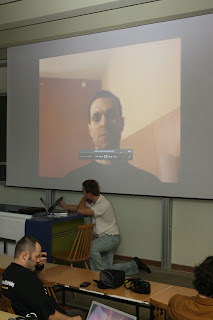 To be honest many people who have been engaged over the years were missing. There would have been A LOT of different folks on stage if we had manage to grab everyone involved from day one…

During next session Grzegorz Duda shared his view on current status of Java community in Poland. Then there was a key part of the conference - 10 different workshops that lasted 7 hours with ~170 attendees in total. 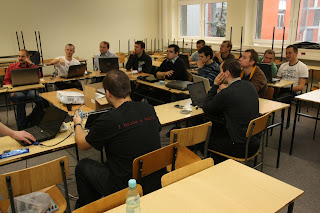 Not all of  them were purely Java or software development focused. Besides Jenkins, Git, or Qooxdoo there was also Arduino, iOS Kickstart and purely "soft" one called "One day with difficult customer". 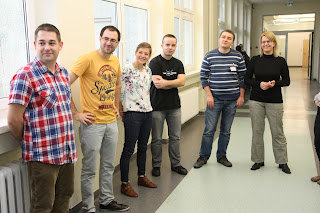 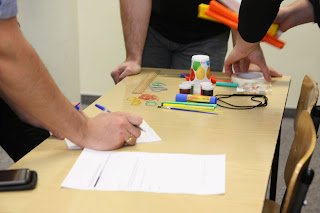 From my perspective it is really good to see that Warsaw JUG is not closed to non Java topics and is serving different needs.

That would be all for the short summary. I had to leave early but from what I heard that was a cool afterparty :)

Here is my photo gallery from the event. Check some more photos from Marcin Zajączkowski and blog relation (in polish) from Bartek Zdanowski.

Posted by Bolesław Dawidowicz at 11:15 AM No comments:

Time for some screencasts

Inspired by awesome work that Wesley Hales is doing in the JBoss Portlet Community I recently decided to try doing screencasts myself. Today I would like to share my first attempts with you. Movies below cover GateIn Portal integration with LDAP and give some insight about internal Picketlink IDM usage. First one demonstrates how you can start experimenting with sample configuration in few simple steps and uses OpenDS as an example server. Second one separately shows Active Directory integration as it requires few special config tweaks and includes MSAD installation instructions (in Part 1).

So far my experience is that.... doing screencasts is way more challenging and time consuming than it seems :)

I hope to get some feedback from you (and I'm already aware about few things that I could have done better...)

P.S. Big thanks to Wesley for sharing his screencast experience
Posted by Bolesław Dawidowicz at 8:45 PM 1 comment:

Another LDAP SDK option for Java

Last week Neil A. Wilson announced on his blog a new alternative to JNDI, Netscape SDK and Spring LDAP providing LDAP support in Java. It is called UnboundID LDAP SDK and I must say that features comparision and code examples look quite promising. Definitely want to look at it closer in the future.
Posted by Bolesław Dawidowicz at 1:24 AM No comments:

Last week Warsaw JUG held "Warsjawa Eclipse DemoCamp 2008" event. I'd had a chance to help a bit with preparations (blame me if you don't like the T-shirt ;). As it was not meant to be a big conference the numbers are quite impressive: 153 attendees! Łukasz and Jacek have already written more complete reviews on their blogs (in Polish). I will just leave you with photos ;)

Posted by Bolesław Dawidowicz at 11:47 PM No comments: 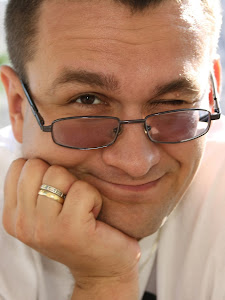